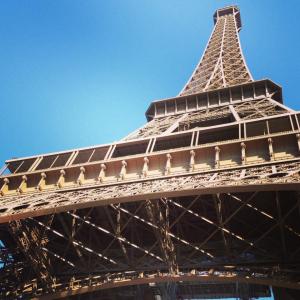 This summer has yet to be a disappointment. I can’t believe the halfway mark of my journey in France has recently passed, I have been beyond blessed to study in such a beautiful country. I am a strong believer that everything happens for a reason. In high school my school did a way with French as a class my senior year so instead of taking an online course; I opted out of taking my fourth year of French. Little did I know that if I had taken that online course I would have been exempt from completing foreign language credits at Mizzou. Yes, that would have been nice, but because of that mishap I was given the incredible opportunity (with the help of my parents) to study French in France itself for the summer. I can’t even begin to put in words what an amazing experience it has been thus far.

As this post is a little wordy I am going to attempt to describe my journey, starting in Paris. At the beginning of June I left my home in Kansas City, a big step in itself, and flew across the ocean to a country I knew little to nothing about. It would be my first journey to another country without my parents, but as soon as I had arrived I have never felt more at home.

Let me begin with the flight. First of all, plane food is not exactly what I would call fine dining, but the flight attendant made up for it. To our surprise at the end of our six-hour flight (and two movies later) one of the flight attendants brought the girls I travelled with a bottle of wine to share with all of the students in our group because we had told him why we were on our way to France. It was a nice welcoming gesture I might say, but then arose the question ‘how were we supposed to get the bottle of wine past customs?’… but as we later found out that would not be a problem.

The first day was the hardest of my travels, only because of the six-hour time difference… jet lag at its finest. We arrived at our hotel around 6AM a little delusional. We were not allowed to check in to our rooms so we placed our bags in the “hold room” and went and got ourselves some breakfast. We all were longing for a nap, but we knew we had to push through to get on the European time schedule. My first meal in France consisted of a warm buttery French croissant, a glass of orange juice (with only one ice cube), and a café (coffee). When I got my coffee I was a little surprised to find out that a black coffee in France was a single espresso shot…  but it kept me awake, as I would be staying awake nearly 48 hours with only a 2-hour nap. This French Cafe would be the place we went every morning for breakfast. By the last day the owner asked to take a group picture of us Americans to hang up in his Cafe. Parisians made us feel very welcomed into their city that is for sure. 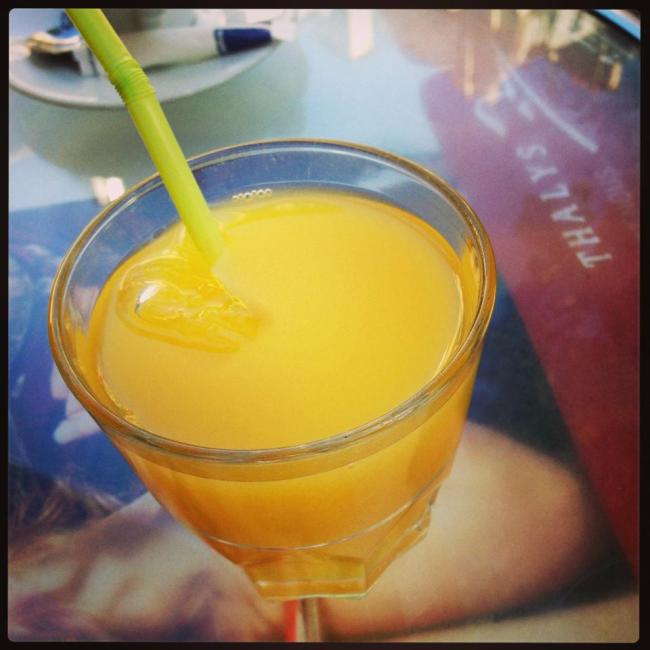 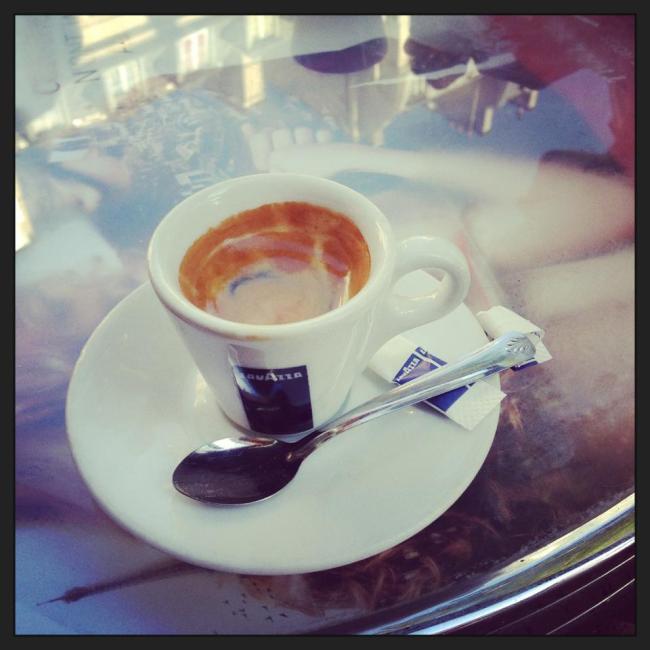 Walking the streets of Paris was incredible. So much is packed into one city, you could spend years in the city and still never see it all. I can say however, the stereotype of young males riding around on mopeds with French baguettes hanging out of their backpacks is not only but the truth. For those of you who might be wondering, yes, French boys are attractive in their own way. They might be lacking some meat on their bones, but they do have great fashion. Although some may not know exactly how to be charming… for example… while sitting outside of a Cafe in Paris a trash truck decided to stop on a one way street, holding up several cars, to honk at us and then proceed to motion ‘call me.’ Apparently there is no way to hide our American identity even from a distance, but anyhow it was a tad unexpected and definitely far from charming.

A girl on the program with me knew a couple people who have been studying abroad in Paris for a while now, so I had some experiences I would not have had otherwise thanks to them. I got to hang out along the canal and drink with all of the ‘cool kids.’ One thing nice about France is that the normal dinnertime here is 8:30pm so happy hour is typically 5-7pm when we American normally eat, perfect for the college budget. Not to mention the drinking age being 18 here is very convenient, and drinking when it’s actually legal is a lot more enjoyable I might add. I also got to visit the Parc de Belleville, one of the most beautiful views of Paris from atop the city. It might have been a sketchy and tiring walk to the top, but it was worth it. In my opinion pictures can’t even come close to capturing its beauty.

Of course I also got to see all the main attractions that Paris is known for including: the Eiffel Tower,

On a side note, the Eiffel Tower was everything I had dreamed it to be, I could sit outside it for hours, the only downside is it’s a prime tourist location so there are always people around, and lots of pick pocketers. When I get back home I will probably walk around hording my bags just out of habit, which I guess isn’t a bad habit to have. Two people on the trip became victims of these horrid pick pocketers, one by the Eiffel Tower, and the other out and about by some young kids trying to get one of the girls in our group to sign their blank, yes blank, paper. Both managed to get their things back thankfully, but still. 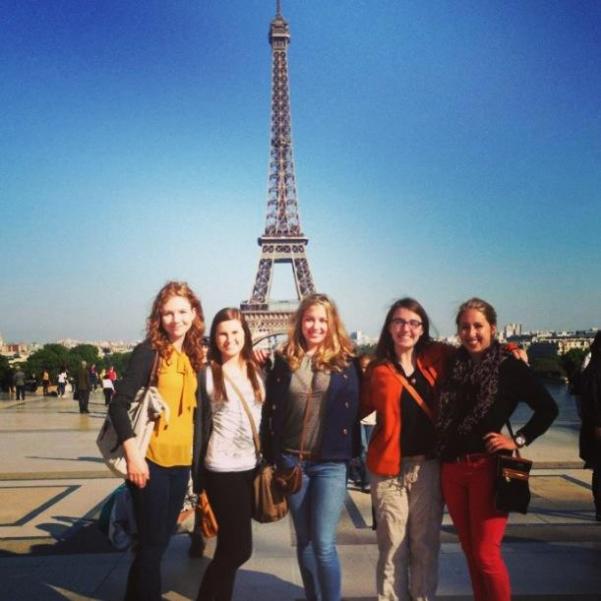 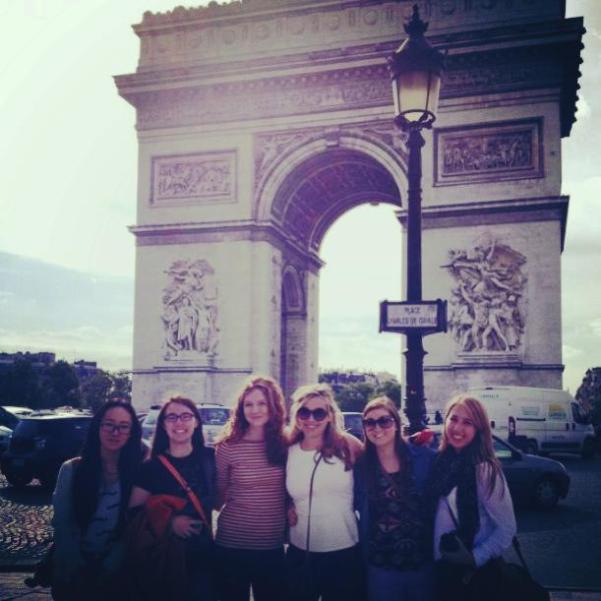 Versailles Palace, (also pictured is the wall of mirrors inside Versailles)

Louvre, (also pictured is the famous statue of Aphrodite),

The Louvre was also a lot of fun.. well only because it’s in the National Treasure movie and because Sarah and I decided to pose like every statue and take pictures to pass the time… got to make memories some how 😉 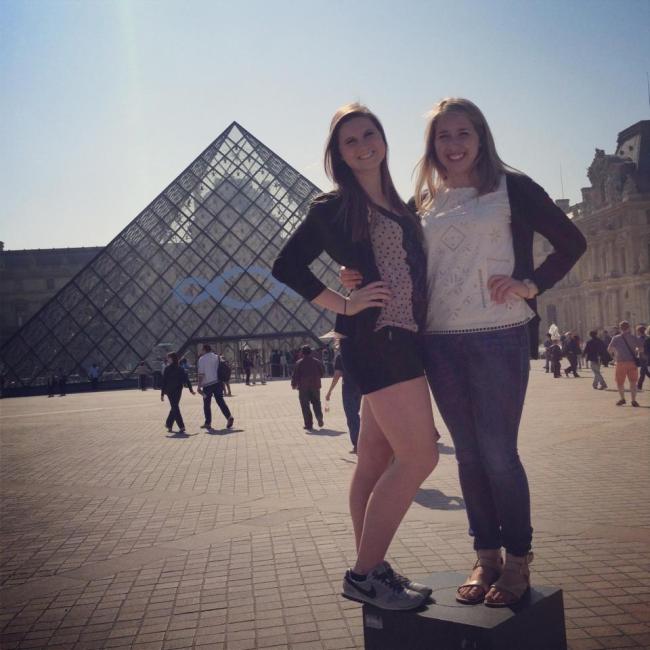 Centre Pompidou, (also pictured is the art outside of the musée)

The Centre Pompidou was very neat because it is the only modern building in France so all of the modern technology is shown on the outside of the building, including the escalators.

and the Lover’s bridge (and no I could not find the Kardashians lock, but I did get to witness a wedding!) 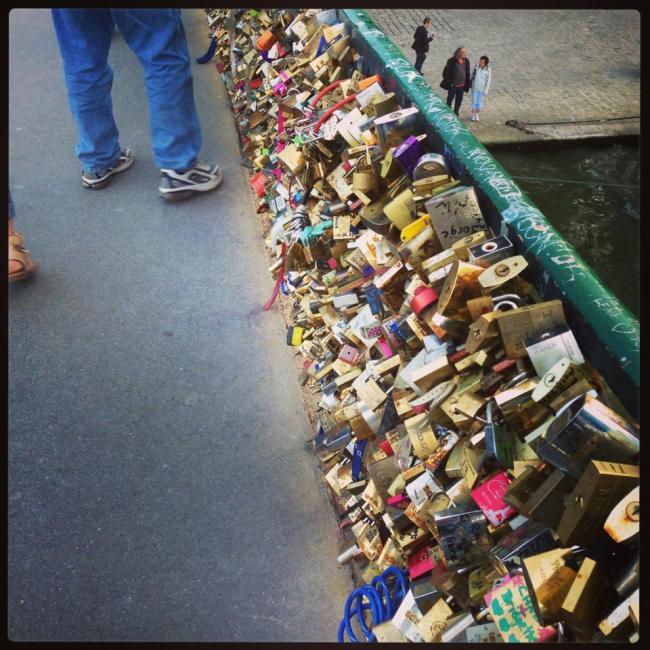 I also visited Stohrer, the very place that invited wedding cakes. It was here I had my very first French Macron, a little piece of heaven.

Now on to more food… One evening I got a nutella crêpe to go from a stand on the street, and I’m glad we don’t have these randomly located on the streets in the States because that would be very dangerous for my waist.

I am however going to miss having my sandwiches on fresh baguettes. I will never forget wanting a du poulet (chicken) baguette for lunch and even though the place we were at had no more left, the nice little Frenchmen went and got me one.

Nor will I forget having my first legal drink, a strawberry margarita with a taco salad that was far from an American taco salad. Instead of being loaded with cheese and shredded lettuce, I got a spinach salad, freshly sliced tomato, and fajita chicken.. it was surprisingly good, just not what I was expecting.

Also instead of wine, cheese, and crackers… its wine cheese and bread here. French people love their bread and I can see why… I have never been one to eat a lot of bread, but I cant stop eating it because it’s too good.  I will talk more about food when I get to Lyon’s adventures because Lyon is the gastronomic capital of France and my host dad is a retired chef and bar tender.

You can’t go to France without experiencing the underground Metro. Wall to wall people, but without them I don’t know how you would get around because drivers here are crazy especially for foreigners. Mopeds and bikes don’t have any regulations either so they zoom up right passed cars; I’m truly surprised there aren’t more wrecks. Metros are not only convenient, but also really cool especially when musicians play for you in the tunnels. The shape of the tunnels allow the sound of the instruments to bounces off of the walls making beautiful music which is quite nice to hear after a long day. 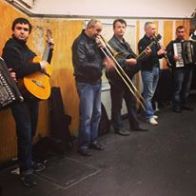 In other news, one of the girls on this trip got engaged while we were in Paris because her boyfriend happened to be visiting also, now wouldn’t that be a story to tell your kids one day. I hope one day I’m just as lucky.

At this point it was time to say goodbye to Paris. Although it was sad, my adventures in Lyon would be just as good, if not better. However, one taxi ride and one train ride stood between Paris and Lyon. Not hard right? Wrong.

First our taxi driver decided to drive our taxi to the end of the road where 30-40 males of different ethnicity stood. Here he parked the car leaving the keys in his ignition with the driver window down and seven pretty girls in the back with all of our luggage. Talk about fear…. if it wasn’t for our professors husband in the passenger seat, someone could have easily hopped in the driver seat and drove away with us. It gets even worse. While everyone in the car felt very uncomfortable, our taxi driver finally comes back and while we think we’re leaving this neighborhood… he drives us even deeper into the crowd of men and once again leaves us parked while he helps the other taxis load even though we asked him not too. A few bangs on the window was all we needed to know we wanted out of that area fast, for as little as we knew drug activity could have been going on. Thankfully, we made it out safely and the next step was the train.

Travelling is never easy especially with 20 students and one professor… so trying to get all of our luggage on the train before it leaves was quite the challenge.. and trains don’t wait for anyone and frequent travellers were far from pleased with us. However, a three hour train ride later, we finally made to the Lyon train station and it was here I got to meet my French father, Jose, for the first time. Little did I know that this family would be almost a carbon copy of my very own family… and I would be blessed with a French sister that would show me the ropes and become a lifelong friend. Unfortunately she is leaving me for New York this week, and I wish her luck on her three-month internship in the States. Stay tuned for my post about my travels in Lyon, the first capital of France, which will be coming soon!