So today in class we got to go out and experiment with the apps we will be using for our next assignment: 360 Panorama and ThingLink. It was a lot of fun given how nice it was. We did, however, get some funny looks as our class raided the quad with our tripods and iPads in hand. Oh well, I think I’m used the looks now… well think is a key word. Anyways, I really wish I knew about 360 Panorama when I studied abroad because it would have given the people back a home a better sense of where I was.

I shot the following panoramas with my iPhone attached to the tripod. The first one was shot standing between Jesse and the Mizzou Columns. You’ll also notice some other journalism nerds doing the same thing as me.

This next panorama was shot standing in front of the Columns with the road leading downtown Columbia directly across from them.

This last one is my personal favorite because you get to really see where I spend most of my time here at Mizzou: The Journalism School. Take a virtual tour if you would like:

I haven’t figured out how to embed 360 Panorama into my blog, so my apologies.

The other app we will be using is ThingLink. This app allows you take a picture and within that picture add another picture, text, and even video. I didn’t get any video from today that I thought added to the picture, but here is an example of what a ThingLink might look like:

Well, I posted the embedded link for ThingLink… and it didn’t work like it should. I think technology hates me sometimes. Oh well, I just posted the link. So here you go! 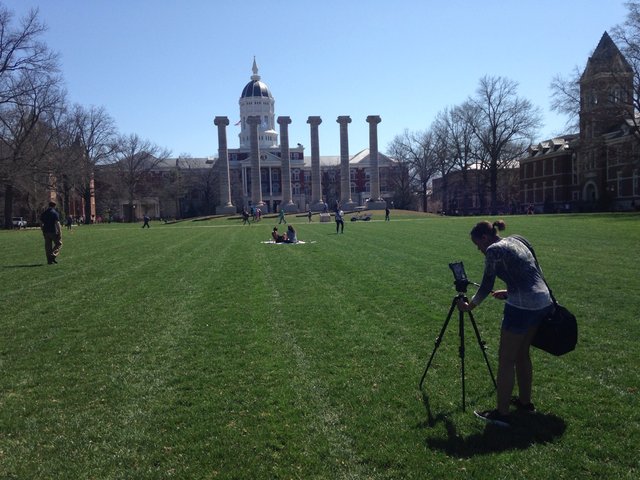 I hope you enjoyed my experimental work!